Bigae, trigae and quadrigae are chariots pulled by two, three or four horses, which were driven by an auriga and used in warfare and races. The Homeric heroes fought in vehicles like these. They are a common icon on coins, paintings, reliefs and Egyptian, Assyrian, Greek or Roman glasses. In ancient Greece they were introduced as a sports discipline in the 81st Olympic Games.

Biga, which has a Latin root, is the shortening for biiuga (double yoke joining two horses), while triga comes from triiuga (triple yoke) and quadriga from cuadriiuga (quadruple yoke). 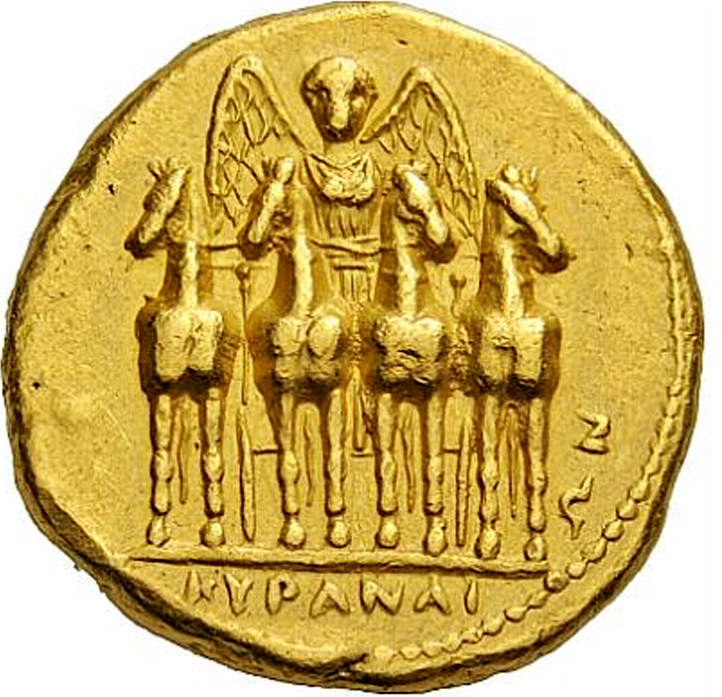 This is the typical case of a “part of something to refer to the entirety”, where the simple beam or yoke become an ensemble, including the chariot and the beasts, in the popular language. Even the chariot drivers, the aurigae, take their name from the yoke, just adding the prefix aur, which comes from the Greek αυρα and the Latin aura, which means wind.

Take note that we are talking about the Latin etymology, but, obviously, there were chariots pulled by two, three or four horses in civilizations older than the Roman. All of them must have had their own names for these chariots, but the fact is that we kept the etymology developed by the Romans. This is why we speak of quadrigae, trigae and bigae when referring to the chariots of all times pulled by animals. The Latin word iuga comes from the Greek ζυγοσ = yoke, so this word has actually a Greek origin, but all the multiples bi-, tri- and quadri- are completely Latin (if they had had a Greek origin, they would have been like this: di-, tri-, tetra-).

But let’s leave the etymology in order to concentrate in the coin itself. After all, we are in a website dedicated to the numismatics.

The coins usually show the figures of different gods on a chariot pulled by horses, deer, etc.

For the introduction we have chosen a coin depicting the front of a quadriga, which is quite uncommon. This is why we know it is a golden stater minted in Cyrene, ancient Greek city currently located in Lybia. Note the magnificent perspective designed to represent the front of the chariot.

Bigae and quadrigae drawn by horses are the most usual chariots in the Hellenic-Roman numismatics. The trigae are much less common in the numismatic art, which only reflected the reality. Given the many draft animals shown in the coins in those times, you will find very few horses in our article. In fact, the only ones can be found in this triga, which is a nice serratus denarius from Gens Naevia, Roman Republic (we only know five minters, triunvirus or families that minted trigae in the Roman Republic, being the family Naevia among them): original design of horses, where the third one turns its head towards the back. I must point out the effort put in the design of the mane, bridles and the ornamentation in general.

The imagination of the Greek and Roman makers had no limits, which can also be appreciated in the design of chariots. They had to represent the action, the war, the gods, the men… The combination of this factors resulted in a large number of representations, gods, demigods and men who turned into aurigae. The chariots were usually pulled by horses, but if the gods were related to some beings in particular, these beings became the draft animals drawing the chariot. So we can find real and mythological animals pulling these chariots. Among the former we can find elephants, lions, deer, mules, goats, panthers, snakes, etc.; while among the latter (smaller in numbers): gryphons, hippocampus, winged snakes, pegasus, etc.

Down below we are showing you a series of mintings, proving which has just been said (no chronological, metallic or value order).

Let’s start with some pieces representing chariots with different animals; due to the proximity to the horse world, we present a Greek tetradrachm minted in Messina, Sicily.

Original design of a biga drawn by mules; note the quietness of the scene, the incredible design of the mules in juxtaposition. At first glance, it may look like a repainted coin, but not like that at all. Everything is duplicated, legs, ears, chest…

We continue with the world of the mammals. Here we can see a large pachyderm, an elephant: magnificent tetradrachm with a quadriga pulled by elephants walking slowly. In this case, the minter was very interested in showing the four animals, placing their trunks in different positions. I do not know the reason for the winding lines lifting from the elephants and wonder, if the author wanted to represent the heat coming from them.

Our following biga is about lions: remarkably, we see Cybele sitting comfortably in a throne, instead of standing in order to drive the biga; the action depicted cannot be more peaceful, and the lions, with a kind face, fiery but quiet, walk slowly. Actually, they are strolling.