At the top, detail of the “war’s” face of the so-called Standard of Ur, which was found in a royal tomb of a cemetery of the Sumerian city Ur (Tomb PG 779, Chamber D). The chariot on the right tramples over a fallen enemy. Both these vehicles, which have four solid tripartite wheels, are driven by two warriors, who are standing and armed with spears. We can even see the gags and rings in the animal’s mouths. Around 2600 BC, London, British Museum. From the book “The art of warfare in biblical lands in the light of archaeological discovery”

The Standard of Ur is a work of art of the times of the Sumerians, towards the XXVI century BC. (Early Dynastic Period III). It was made using the technique of intarsia, which was typical of Sumer and Acad. This technique consisted in embedding stones and other materials, distributed in successive lines, in furniture, instruments and other objects, including buildings. It was found by the British archeologist Leonard Woolley at the dig of the Royal Necropolis of the ancient city of Ur (located South of today’s Baghdad, Irak) in the decade of 1920. 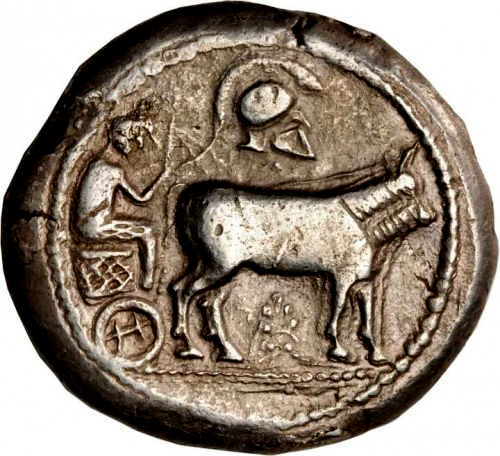 In part two of the article “Bigae, Trigae and Quadrigae” we begin by presenting an impressive coin, a large  dodecadrachma (12 drachmas) from ancient Greece, in Thraco-Macedonia. This is a piece, where we can see a chariot or biga pulled by oxen.

The Thraco-Macedonia is the area, where the Thracian tribes that settled in the Macedonian region lived, the same as the Bergaios and the Derrones. In fact, this piece belongs to the latter. Later, as all the region was appended to the Macedonian realm, some coins from the tribes and cities continued to be minted and distributed.

The Derrones came from the tribes of Paeonia (Thracia). In the times of the king Philip II of Macedon Paeonia covered most of the current Republic of Macedonia, located North of the ancient Macedonia (which corresponds to today’s Greek region of Macedonia) and South of Dardania, corresponding to the current Kosovo.

This is a very special piece, which was struck over a very round surface, which results in an almost perfect centring with all the data very clear, both in the obverse and reverse. The stroke on the reverse was executed using a uniform pressure, which allowed for an almost complete triskelion, which is quite “rare”. With a light patina and also an excellent purity of metal for this type. In short, an exceptional coin among the early Macedonian silver pieces.

Note the importance of the appearance of the aphlaston, a device we can see under the oxen (these are probably the only coins, where it can be found). The aphlaston was usually located in the stern of war galleys in order to measure the wind’s speed. Later, it became an ornament in pots, shields, etc.

The appearance of a Greek triskelion (three legs) in the reverse may represent the set of three Past, Present and Future; the balance among body, mind and spirit; or maybe it represents the beginning and the end; or the eternal evolution and perpetual learning. In short, both ornaments represent: movement.

And let’s change of animals. Now we will show you a rather common biga in the Roman Republic. I am talking about the biga drawn by deer, which we like because these animals are slender, strong, well-shaped, with a majestic and fiery bearing and with an impressive speed when running.

We must highlight that in this case they are not just moving, but running very fast. The deer’s position speaks of full gallop and the auriga (Diana) is leaning frontwards, while whipping the animals.

The appearance of a biga pulled by goats has to do with popular ceremonies, which took place in the Roman world and were connected with mythological aspects. These bigae are called “nanny goat bigae” in Spanish, but they were actually pulled by he-goats. We probably tend to use the feminine because the masculine gender does not sound good in Spanish.

This coin and another similar ones are connected with the goddess Juno Caprotina. Juno, had many significant and different nicknames, names and titles, representing different aspects and roles of the goddess. In fact, she had more names than many other more important Roman gods. Due to her main role as a marriage goddess, she received titles as Interduca, “the one who leads the bride towards marriage”; Domiduca, “the one who brings the bride to her new home”; Cinxia, “the one who loses the bride’s girdle”; Lucina, “the one who brings children to light”; Lucetia, “the one who brings the light”, when she helped at labour; Pronuba, honour midwife. And other titles which were not related to marriage, as: Regina, “the queen”; Moneta, as wealth protector; Pomona “of the fruit”; Ossipagina, “the one who moulds bones”, and other epithets. And the one that interests us the most: Caprotina for her relationship with the Lupercalia festival, which took place ante diem XV Kalendas Martias (February 15th according to our calendar). On the day of Caprotinae Nonae, the Romans, free men and women, as well as the slaves, had a “picnic” and had fun together near a wild fig tree (caprificus); they took part in races, battle drills with fists and stones, they talked in an unappropriate way and eventually sacrificed a he-goat in honour of Juno Caprotina under a fig tree.

With this biga, pulled by snakes, we find our way to chariots pulled by animals different than mammals. This is a denarius dedicated to the goddess Ceres and some of her festivals.

Cerealia or Ludi Ceriales «Ceres’ games» was the most important festival, which started in the century III BC and was held annually between April 12th and 19th. With the passing of time the tribute to Ceres got especially related to the plebeian classes, who dominated the grain trade. We know little about the rituals of this cult, but one of the few we know implied tying burning embers to the tails of foxes, which were released in the Circus Maximus.

There were many poets, who said that this goddess was usually carried in a chariot pulled by snakes.

Note the high quality of this denarius with a beautiful patina, very hard to find.

Here we can see a biga pulled by hippocampus (seahorses). Fully marine piece and the first one we study with a mythological origin. The goddess Salacia in the obverse and Neptune in the reverse. As this is a Roman coin, the gods depicted carry a Latin name – although they have a Greek origin. It is funny to find English, French and Spanish inscriptions, mentioning the goddes “Amphitrite” (English and French) or “Anfitrita” (Spanish) in the obverse, while the reverse shows “Neptune” in English and French and “Neptuno” in Spanish. Either we use the Greek names Anfitrite and Poseidon, or the Roman names Salacia and Neptune.

This family of minters, «Crepereia», must have been connected with the marine world, because all the pieces known of this series (they did not mint any other type) show the goddess accompanied by some sea animal: dolphin, turtle, crab, fish, octopus, sponge, etc.

A piece which is a little oval, centered both in the obverse and reverse. Beautiful portrait of Salacia, lightly dented. Nice reverse, with a silver layer which allows us to see the copper. Beautiful patina of an ancient collection with golden and blue reflections.

We say good-bye with this very rare piece of the family Aurelia. In this case, “very rare” does not mean scarce, as there are many of them. Actually, it means that, as far as I know, this is the only case in the Roman Republic, where we can see a biga pulled by centaurs.

According to some sources, one of the ancestors of the minter Aurelius Cotta might have been connected with the victory over Antiochus the Great in the border between Thessaly and Epirus. It was in that area that there had been a battle between Hercules and the centaurs in ancient times.

Another fable about Hercules says that after completing the twelve labours ordered by Eurystheus, he left for Calydon as a free man. Once there, he married Deianira and stayed in Calydon until one day, during a banquet, he killed king Oeneus’ nephew by mistake. Despite being forgiven, Hercules decided to leave for Trachis with Deyanira. On the way there, they arrived at the river Evinos, where the centaur Nessus offered Deyanira a transfer to the other bank of the river in exchange for money. But Nessus, who actually intended to rape Deyanira, did not keep his word and ran away with her. So Hercules had to hurt the centaur with his poisonous arrows.

The centaurs are a race with a human torso and head, but the body of a horse. The female versions are called centaurides.