Coins and Bonds from the Canton of Cartagena

On 11 February 1873 the First Spanish Republic was declared after the abdication of Amadeo of Savoy. The federal Republicans tried to establish a series of independent cantons (cities or a confederation of cities).

On 12 July 1873, a group of volunteers invaded the city hall of Cartagena. Shortly after, the Junta hoisted a red flag at the building – they decided to use a Turkish flag, because they had thought that the half-moon would not be seen from the distance in the dark, but as they found out that they were wrong, the moon and star were allegedly covered with the blood of some militiaman. And that was how the Canton was proclaimed.

Antonio Gálvez Arce “Antoñete” was named commanding general of the Army, the Militia, and the Navy.

In the manifesto published in the evening of July 12th by the “Public Health Board”, which had been constituted by the “will of most of the Republican people of this community”, the proclamation of the canton was justified as an act of defense of the Federal Republic. A total of 32 out of 45 town councils, which currently form the region of Murcia, either established a Revolutionary Junta, or declared their support to the movement. The general Contreras took control of the rebel forces, while Roque Barcia was subsequently appointed chief of the Canton.

The first government troops which were sent to re-establish the order were not successful, so the Republicans took the chance to try incorporating new towns to the canton. They used the fleet they had seized at Cartagena’s port to threaten the coastal towns and demand a revolutionary tax to obtain funds.

One of the first problems the Canton of Cartagena had to face was the lack of money. The revolutionary government decided to create some paper money, which was not embraced by the common people, who possessed metallic coins and tended to get rid of notes. On 14 August 1873, as the Canton ran out of money (number 21 of the newspaper of the Canton), the Public Salvation Junta of Cartagena published an order, whose article number 7 said: all the pending credits owed by public depositories and connected with salaries, daily wages and works would be paid with paper money, which no one could reject. This paper money would be exchanged in numerical order, whenever depositaries had the necessary funds. The article 8 added that all the amounts received by the Public Treasury would be preferably invested on the supply of the stronghold, so the money would go to Logistics.

The canton needed money in order not to discredit its treasury. They organized the payment by means of bonds, which is the paper money mentioned before. On August 4th they put into circulation bonds for 2.000, 10.000 and 20.000 reales. The distrust towards this kind of money, emphasized by the fact that its circulation took place during the revolution, made the introduction impossible. On August 14th, the paper money was replaced by the silver cantonal coin. The Navy’s historical archive in Cartagena keeps three check books, one for each kind of notes issued, and all of them almost empty.

Smooth white paper with watermark, which is very important to distinguish them from the existing photocopies.

Watermark: By the manufacturer P.F. In some notes we can read “Pablo”, while others show “Fontanet”, separated by a little branch with leaves. This proves that these bonds had been printed in sheets by twos and were cut afterwards.

The watermark on each note may be found on the front or the back. So, if you are looking at the obverse, you may read the text, but sometimes you must turn it around in order to read it properly.

There are three values:

Printed on just one side. On the side, surrounded by plant leaves, we can read: SPANISH FEDERATION.

Paper money, foreseen for numbering. Almost all the ones known without a number. -PROVISIONAL GOVERNMENT- and beneath – OF THE SPANISH FEDERATION.

Compulsory advance note imposed by the Provisional Government of the Spanish Federation with an annual 6% interest rate. Accepted at 50% for the payment of property taxes, but for the total amount when purchasing national goods.

(There was usually just one signature, we do not know if these three signatures were added later). 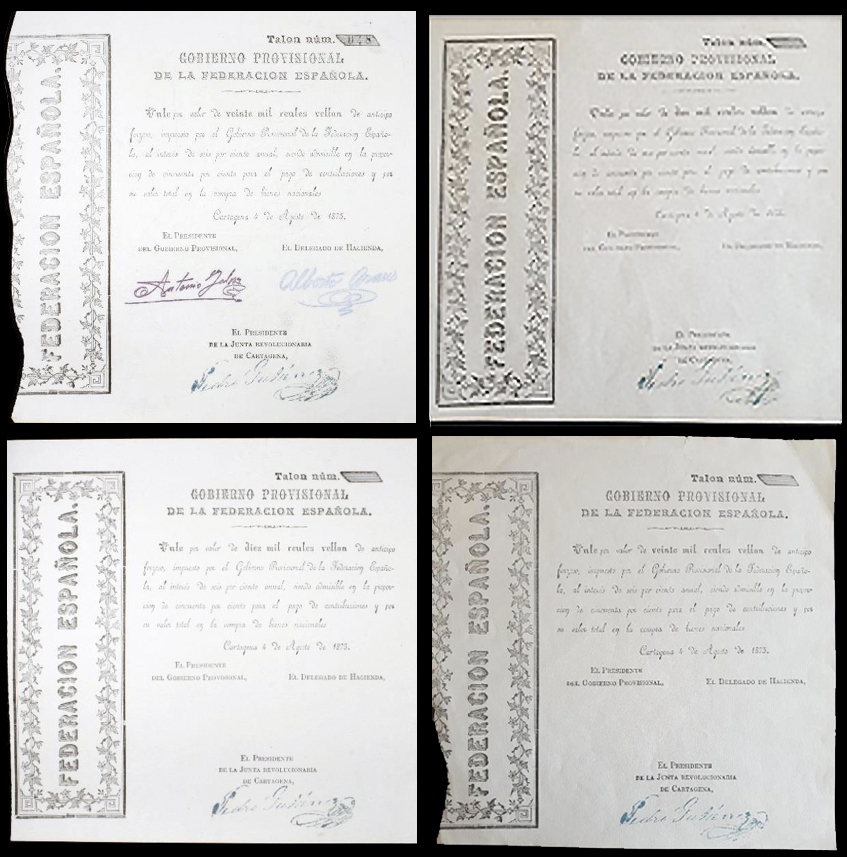 At first, payments in the Canton were made by means of silver bars or silver pieces, whose value depended on their weight. The Revolutionary Junta approved a plan, according to which silver coins worth 5 pesetas and 10 reales were going to be minted with the purpose of normalizing and cleaning up the economic situation of the city, which already was rather delicate.

The Prison of Cartagena played a significant role in the issuing of coins. After all, there were forgers among the prisoners. The Revolutionary Junta offered them freedom in exchange for the work of these masters in the manufacturing of dies.

All the silver, which was obtained from the mines of Mazarrón, as well as the silver objects seized by the ships from Cartagena at ports and coastal towns of the Mediterranean Sea, were melted, laminated, and prepared for minting. Besides, the factory belonging to the marquis of Figueroa was confiscated.

The coins were minted in the Arsenal of Cartagena, using the die machines for making ship tools. These coins have no figures on them. Maybe because that was too difficult for their creators, who were no expert engravers, or maybe because of the haste.

The factory worked until the end of the war. In January 1874 it was even necessary to relocate the production on the ground floor of the arsenal due to the bombings. That is where they kept working until January 10th.

At first, the coins minted were the same as the legal currency circulating all over Spain. Although it has never been admitted, it seems that the official coins were forged: mainly silver two-peseta coins, but also 5, 10, 25 and 50 cent copper coins. They used dies, which probably came from Oran, although some imprisoned expert forger might have made them too. These coins were so perfect that it was difficult to distinguish them from the legal ones. There were up to twenty different dies to forge coins of Isabella II, Amadeo and the provisional government. On the first days of September a large amount of silver two-peseta coins, copying the legal coins of 1868, were minted, and put into circulation. However, shortly after, those coins were forbidden, and new dies were made to mint their own coins.

Nicolás Calvo Guaiti was appointed as manager, responsible for the minting of coins. Pedro Sala, who had been chief mechanic at Barcelona’s mint and was a prisoner in Cartagena, was in charge of the dies for minting coins. The expert smelter was Cipriano Fernández Rufete, who used to work at the National Mint until he was condemned for forgery and sent to the prison in Cartagena. And finally, Antonio Aroca, chief engineer of the Arsenal, was designated manager of the factory.

Cantonal coins were minted in a second phase. They were produced from September 17th on, according to the cantonal newspaper of the following day. The quality was raised to a purity of 925 thousandths, so these coins were 25 thousandths purer than the legal currency. The tokens were larger than the usual ones with the same face value but heavier, between 26 and 28 grams, while the official weight for duros was 25 grams. A total of 150.000 of these coins were minted. The manufacturing of 10-reales coins started at the end of the cantonal phase and faced many difficulties due to the constant bombings, which explains why there were only a few pieces with this value. The 10-reales coins weighed between 13 and 14 grams.

The word CANTONAL running horizontally with a five-petal flower above it and a decoration underneath. Everything surrounded by a pearl circle. At the top REVOLUTION, decorations on the sides, FIVE PESETAS at the bottom.

On the outside – CARTAGENA, BESIEGED BY THE CENTRALISTS- and a decoration. Inside a circle of pearls, SEPTEMBER and 1873 (underlined) in two lines. A five-pointed star above them.

Eight dies were manufactured and as a result of the different combinations, the following coins were obtained:

The different types are listed on “Numismática Española” by Aureo& Calicó, although other authors list less types.

There is one piece with 93 pearls on the obverse / 93 on the reverse, which was manufactured at Mening Freres’ workshop in Brussels later.

In the centre, running horizontally, the word CANTONAL, a five-petal flower above it and a decoration underneath. All around this, a circle with 70 pearls. At the top, the word “Revolution”, on the sides two nine-pointed stars. At the bottom, TEN REALES.

Around a circle consisting of 61 pearls, CARTAGENA BESIEGED BY THE CENTRALISTS and a nine-pointed star. In the centre, SEPTEMBER, and underneath 1873, underlined.

On the obverse, we can usually see a line at seven, because of a crack in the die, which was caused by its repetitive use and got larger with the passing of time.

This coin existed under the number 11230 in the catalogue by the famous Catalonian numismatic Vidal Cuadras. Arturo Pedrals, a writer of this catalogue, added “foreign minting”. This is clearly an unofficial minting made at Mening Freres’ workshop in Brussels after the Revolution.

In the centre, running horizontally, the word CANTONAL. A five-pointed star above it and a decoration underneath. All around this, a circle with pearls. At the top, “Revolution”, two flowers on the sides, TWO PESETAS at the bottom.

Surrounding a circle of pearls, CARTAGENA BESIEGED BY THE CENTRALISTS and a flower. In the centre, DECEMBER, and underneath, 1873, underlined.

Because of the siege laid to Cartagena by the centralists, on 16 December 1873 Roque Barcia sent a letter to the American ambassador, Daniel Edgar Sickles. In this letter, which was addressed to the president Ulysses S. Grant, he asked if the Canton could fly the American flag as the state number 51 of the United States. The American president promised to study the matter, but he did not even have the chance to do so, as six months later, on 12 January 1874, Cartagena surrendered after a six-month siege and an intense bombing which destroyed half the city.

On 14 January 1874, as the war was over, the Mayor of Cartagena, Jaime Bosch, requested the withdrawal of the circulating coins minted by the Cantonal Junta.

From the point of view of a collector, I think that we should have one five-peseta coin and a ten-real coin in our collection. A bond would also be advisable in case you like bank notes.

This collection can be enlarged by acquiring all the variations of the die for the 5-peseta coin, which would make our collection highly specialized.

To cap it all, we could buy the 2-peseta coin, although I do not consider it essential, as I do not think it really belongs to that time. But note that the catalogues are starting to include it, as they have already done with Reginald Huth’s essays on Isabella II, so they may be valued in the future.

For those who want to gild the lily, they can buy the medals commemorating the centenary, as decorative objects lacking any numismatic value. But who knows, if one hundred years from now they will also be reviewed, as the numismatic houses are auctioning them.