A young man from Lydia enlisted as a helmsman in a pirate ship heading for Naxos. One day, as he was on the deck, he stood up for a drunk young man, since he thought he could be the god Dionysus, who had been captured by the pirates. When they were about to throw him overboard, the boozer proved to be the god. The ship stopped, ivy started sprouting from the wood and the god rose to his feet, crowned with vine leaves and raising his stick, covered with vine and ivy tendrils, and with a pinecone on one end. The pirates got scared and jumped into the sea, where they turned into dolphins. According to the legend, this explains why dolphins accompany and save shipwreck survivors, as they are the pirates who want to expiate their guilt.

This legend or mythological text tells us how some sailors turned into dolphins. There are very few references to this metamorphosis, because it seems that in the Greek mythology there are no gods or demigods, who are half a dolphin half a man. This is why I found it so strange, when I found a coin with such features.

This is an electron stater from Mysia, Kyzikos. Around 550-450 BC. Figure of a naked winged man with a dolphin head, swimming while holding a tuna fish with his left hand and his right hand raised behind his head. 16.11gr., 20 mm.

This piece of great beauty is not to be missed. Following the purest Greek style of those times, it shows well the swimming movement of a naked man, his muscles and even his relaxed penis… You cannot ask for more realism and perfection in a carving which hardly reaches 2 cm.

Unlike other mythological creatures, the dolphin man has no name. For the ancient Greek he was not important enough to get “baptized”. All of us remember many of these creatures: the fish man = triton, the horse man = centaur, the bull man = minotaur; the eagle woman = harpy, etc.

Despite the lack of documents about this hybrid creature, we have found an Etruscan pot of the 6th century BC, representing the moment when the sailors turn into dolphins. 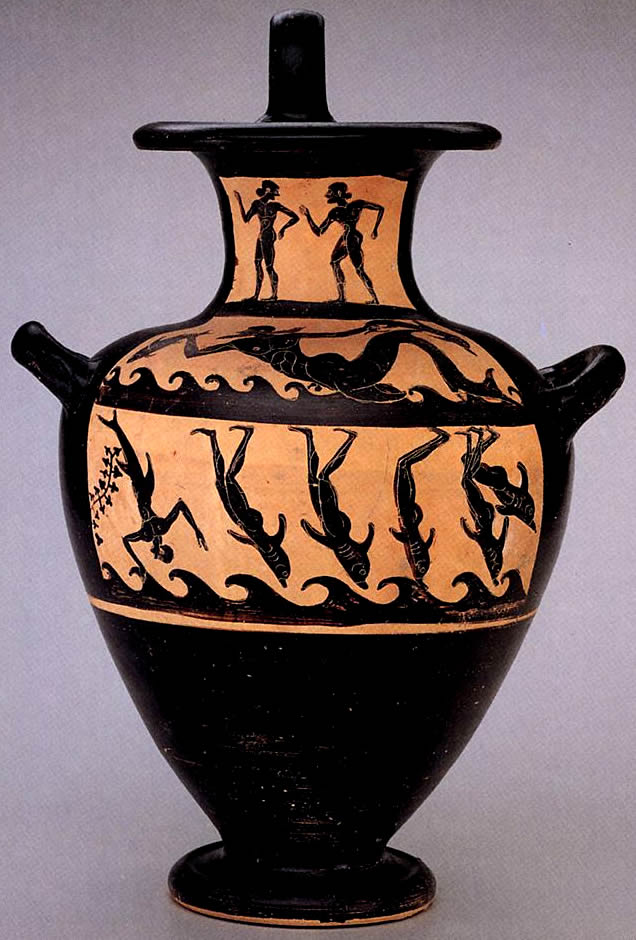 Next, an allegory showing why the Greek consider that the dolphins bring good luck. Dolphins were known for preventing humans from drowning. They were also known as the only creatures which could love a man without expecting anything in return.

Regarding the numismatic information about this coin, which is the main topic in Tauler & Fau’s blog, we can add that there are only 2 pieces in private hands. The second of them can be seen right below.

Stater with similar characteristics but with a worse state of preservation. It seems that it was carved with different stamps. It weighs 16,06 gr and has a diameter of 22 mm.